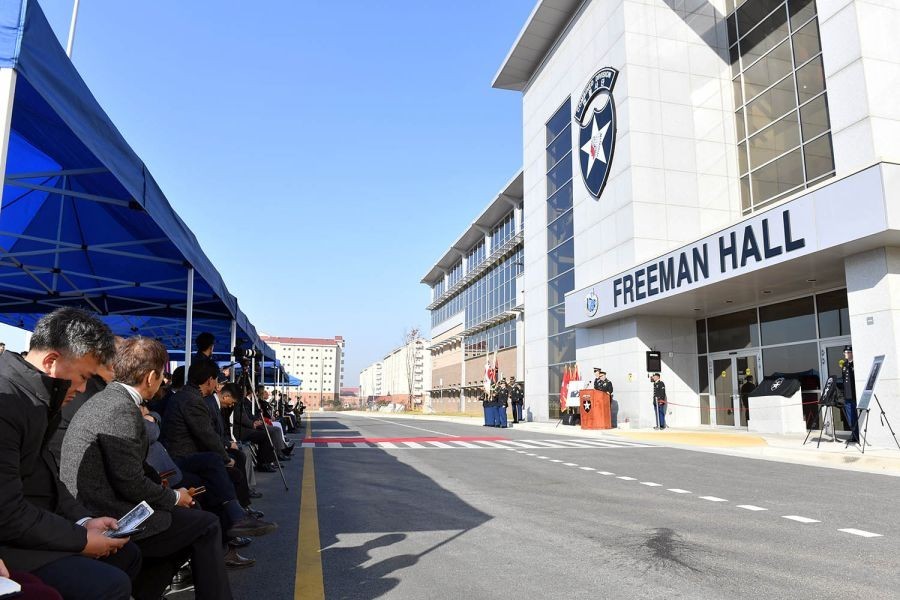 Reposted from US Army

CAMP HUMPHREYS, South Korea — For many Americans, the Korean War may seem like distant history, as the armistice that ended hostilities was signed in 1953. However, for the Soldiers of the U.S. Army 2nd Infantry Division, or 2ID, the potential for large-scale conflict on the Korean peninsula is far from a schoolroom memory — it’s a reality they live and breathe every day.

The 2ID, based in South Korea, is tasked to defend our allies, deter North Korean aggression and, if necessary, be ready to “fight tonight.” To accomplish its mission, 2ID relies on the U.S. Army Information System Engineering Command, which designed and managed the command, control, communications, computers, cyber and intelligence, or C5I, fielding within the state-of-the-art secure operations center where those capabilities come together.

Part of the U.S. Army Communications-Electronics Command, USAISEC has extensive experience providing engineering support to enable mission command of the Army and joint warfighters. However, the operations center was the first time the command created a project management office from the ground up, overseeing the C5I design, implementation, integration and sustainment process from beginning to end, according to Project Manager Rob Wellborn.

“You’re taking a bunch of infantrymen and telling them, ‘Here’s what you have to do for project management oversight,’” he said. “To ensure project success, the USAISEC team worked hand in hand with the 2ID transition cell and deputy chief of staff to involve them throughout the entire project.”

The project’s origins date to 2004, when the United States agreed to relocate the bulk of its forces in South Korea from the Yongsan Garrison in Seoul to Camp Humphreys, 40 miles south. Over the next decade, Camp Humphreys expanded to more than 34,000 personnel and added 680 buildings, including a new 2ID headquarters, Freeman Hall, in which the operations center is located.

In 2014, the U.S.-Republic of Korea C5I Joint Working Group asked USAISEC to deliver the C5I infrastructure needed for 1,425 U.S. and Korean intelligence, operations and cyber warfighters. The total project called for five secure compartmented information facilities, or SCIFs, on Camp Humphreys. Two have been completed, including the Freeman Hall operations center, while the remaining three are scheduled for completion in 2021-2022.

Inside the operations center, 175 2ID Soldiers operate complex, multi-level audio-visual systems that transport data around the facility and provide a common operating picture of 2ID and enemy activities. For the design process, USAISEC borrowed a concept from software development known as DevOps, which focuses on close collaboration with actual users.

“We were involved with the users from the beginning, interviewing them on how they needed to use visual information systems to accomplish their wartime mission,” Wellborn said. “It was an iterative process to ensure the center was exactly what they were looking for, and it hit the mark right in the bullseye.”

The project required intense cooperation among numerous parties. For example, the Army Corps of Engineers coordinated construction by both Korean and U.S. contractors. After construction, bringing the facility online in 2018 required input from the Camp Humphreys Network Enterprise Center, the Defense Information Systems Agency, various civilian and military intelligence agencies, and more.

Despite these challenges, the project came in on time and budget at $9.6 million thanks to careful management, said Deputy Project Manager Ricardo Alonzo. “As the project evolved we got greater cost fidelity on efforts and materials,” he said. “That enabled us to refine the cost and reinvest the savings into the project.”

Today, USAISEC continues to provide on-site technical sustainment for the center, one of 18 mission command center modernization projects USAISEC is supporting worldwide. The center has become the central hub for 2ID cyber and intelligence operations and a showcase tour stop for visits from dignitaries and VIPs. In the future, the USAISEC team will continue to capitalize on its successes with 2ID to ensure the cyber warriors in the remaining SCIFs are equally satisfied with their C5I capabilities.